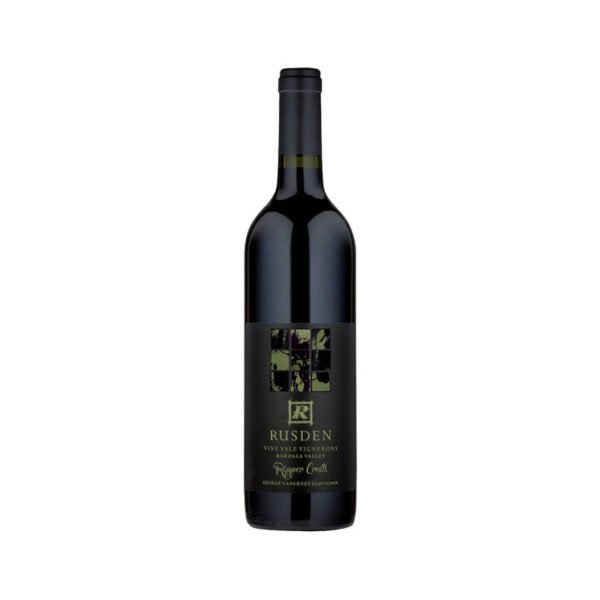 Rusden Ripper Creek Shiraz Cabernet 2018. Rich fruit characters of black berry, plum, some liquorice and herb rub. The palate is soft with dark fruits, there’s subtle herb and spice on the finish too. A great all-rounder everyone can enjoy.

Rusden Ripper Creek Shiraz Cabernet 2018. Rich fruit characters of black berry, plum, some liquorice and herb rub. The palate is soft with dark fruits, there’s subtle herb and spice on the finish too. A great all-rounder everyone can enjoy.

1979
Christine & Dennis Canute purchased 40 acres of run-down vineyard on the white sand over clay country in the heart of the Barossa.
Grapes were not a precious commodity at the time, but the idea of a “hobby farm,” with room for the kids to run, seemed adventurous and was to become a serious labour of love. Dennis continued his profession as a teacher to provide the funds for Chris(tine), a 6th generation Barossa grape grower, to slowly rejuvenate the old vineyard. Thankfully the old Shiraz and Grenache survived the tragic ‘vine pull’ of the early 80’s. At that time the Canute grapes were sold to local wineries. The large companies used the Barossa as a blending ground for fruit from all over South Australia. Grape prices were laughable unless you were crying!

1992
Always believing in the quality of the fruit we grew (and not being able to afford a decent bottle of red) Dennis, with friend Russell, decided to make a barrel of Cabernet Sauvignon.
It was good enough for our own consumption and enjoyment. It was good enough to put a label on so we came up with the name RUSDEN (the shortened forms of Russell and Dennis). That was 1992. In 1994 the home-made Shiraz was consumed with relish and the decision was made to carry out some serious ‘research and development.’

1997
In 1997 we purchased 5 second-hand barriques and experimented with the varieties Shiraz, Grenache and Cabernet Sauvignon.
The attitude of larger wineries to Barossa fruit (which was “we’ll grow the quality, you grow the quantity!”) stiffened our resolve to prove fruit grown on Vine Vale sand could produce wine with an individual style that had the capability of holding its own amongst its peers.

So in 1997 we purchased 5 second-hand barriques and experimented with the varieties Shiraz, Grenache and Cabernet Sauvignon. The pressings and free run from the Cabernet and Shiraz were kept separate to note the different maturation of each wine in different styles of oak. Chris and Dennis’ son Christian, who was working at Rockford Wines at the time, became an essential part of the business during this vintage.

1998
This brought about the inspiration to get stuck into the vineyard; at that time fully mechanized.
The arduous but incredibly rewarding process of bringing back vines from their “machine-deathbed” began, starting with the Shiraz planted in 1969. Slowly the old vines were pruned back block by block. Gradually the quantity of wine produced increased, but more importantly, the improvement in the vineyard led to the improving quality of the wine itself. In 1998, 7.5 tonnes were crushed and a white wine was made for the first time out of lowly Chenin Blanc, picked ripe and barrel aged. This was released in mid ’99 and named “Christian” as it was his “baby.” 1999 saw a crush of 10 tonnes, including Zinfandel (from the oldest Zinfandel planted in Australia) and Mataro.

2007
Christian returned from a vintage in Mexico in 2002 with a vision of a cellar door and communal dining area built around the wood oven.
It would be designed to warm the souls of wine lovers through fire and food, enjoyed with rare, aged Rusden wine procured from the museum. The idea came about from a short stay in a bed and breakfast adobe in Baja’s Valle de Guadelupe, where each morning guests were invited to share in communal breakfast in the kitchen centred around a working wood oven. The atmosphere was warm and relaxing with a charmingly rustic old world feel.

In 2007, work on our cellar door began. The old garage was pulled down and the building materials re-used to build the underground cellar in our vintage shed. The slab was then laid, the walls went up and the old wood-fired oven became part of the fabric which makes up our winery today.

2017
As with all family businesses at some point there is a time for generational change.
For Rusden Wines this period culminated in a gradual changeover until 2017 at which point Christian & Amy took over the reigns from Dennis & Christine Canute.

After nearly 40 years of devoted service to the vineyards and winery, Dennis & Chris have officially retired from the business. There’s no doubt they’ll still play an important role in the winery and there’s every chance at harvest & vintage that you’ll run into them in and around the winery. Christian & Amy intend to continue the legacy in the spirit of how things were started with honesty, hard work and a view that quality will always trump quantity.

TODAY
The annual crush is now 80- 100 tonnes for the Rusden label.
All fruit is sourced from our own vineyard and all wines are made on-site. Rusden is a family owned and operated vineyard and winery, determined to produce only top quality hand-made wines.