The Manyara Pinot Noir 2017 has a nose of plum, fresh beetroot and dark cherry. The palate has hints of soy, spice with red liquorice and tight blueberry notes. It has a lingering palate and tight acidity typical of good Pinot Noir.

The Manyara Pinot Noir 2017 has a nose of plum, fresh beetroot and dark cherry. The palate has hints of soy, spice with red liquorice and tight blueberry notes. It has a lingering palate and tight acidity typical of good Pinot Noir.

Manyara Wines is a boutique winery from the Adelaide Hills, owned by Simon and Melissa Roe. Their vineyard and home are located on a property at Balhannah, about 30 minutes from Adelaide, where they live and breathe the seasons and the fortunes of each vintage. The cool climate region has low night-time temperatures and good rainfall, providing ideal grape growing conditions.

Simon grew up in South Australia’s Riverland where his grandfather was a winemaker. The process has always been a source of fascination and he has long wanted his own label. While he directed his interest in quality produce into establishing a successful food and wine import business in Asia, the pull to winemaking has remained strong.

When they were looking to return to Adelaide after living in South East Asia, they wanted a business they could both feel passionate about and found it at Manyara, which they purchased in August 2014. Simon and Melissa feel fortunate to live and work in the picturesque Adelaide Hills and were excited about the potential of the vineyard.

Simon and Melissa are proud of the rich history of Manyara, which was previously a racehorse breeding and training ground established by prominent Adelaide businessman – and SAJC member – Rex Lipman. Named after a brood mare, Manyara retains its training track and stables. When they walked around the property with Rex, he explained how he’d transformed it from a piggery to a sought-after horse-training facility and what a labour of love it had been. The Lipman family planted the first vines in 1994. 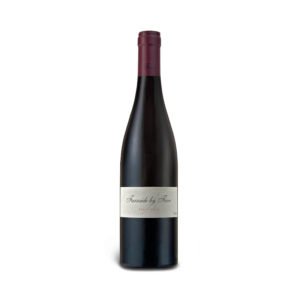 By Farr Farrside Pinot Noir 2017 exhibits more masculinity, structure and savoury components, while deep meaty, spicy and mineral flavours also continue to evolve. A balanced array of red and black fruits, Farrside pinot noir is fresh and edgy with bucketloads of character. This is a firm yet delicate wine with a long-textured finish.