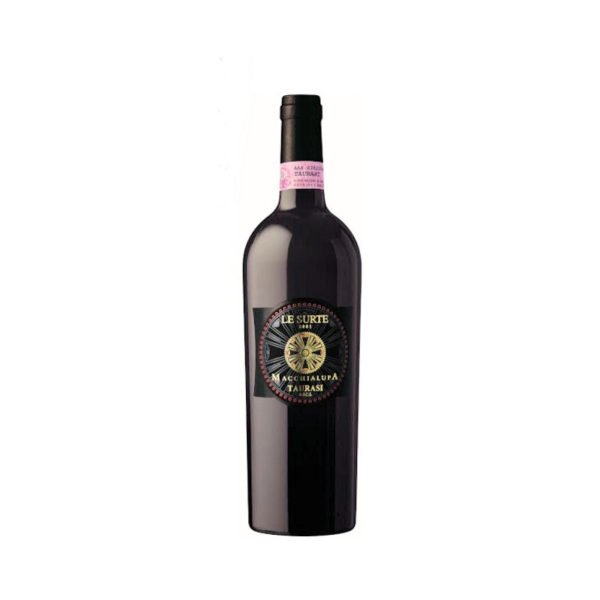 – Taurasi is the prince of Campania wines, from Aglianico Taurasi grapes grown with special care and attention.
Frequent pumping over in the winemaking process and aging in French oak barrels for 12 months combined with bottle aging for 24 months.

Intense ruby ​​red in the glass.
The nose is complex, well balanced and intense in its fruity and floral expression. Notes of blackberries, morello cherry, violet, tobacco, vanilla and cinnamon emerge.
On the palate it is full and soft, with the heat balanced by freshness and flavor. Fine and well integrated tannins, never aggressive in the full-bodied sip. Persistent.

Macchialupa Le Surte Taurasi 2011 is intense ruby ​​red in the glass.
The nose is complex, well balanced and intense in its fruity and floral expression. Notes of blackberries, morello cherry, violet, tobacco, vanilla and cinnamon emerge.
On the palate it is full and soft, with the heat balanced by freshness and flavor. Fine and well integrated tannins, never aggressive in the full-bodied sip. Persistent.

The Macchialupa Winery is located where it exists during the day a solemn and mysterious silence, and the climate is healthy:dry in winter, cool and breezy in summer.

The winery was born in 2001 from the encounter of the love of an oenologist for the Fiano di Avellino and the Aglianico of Taurasi and the passion of an agronomist / viticulturist for the Greco di Tufo.

Valle del Sabato, on the border between the province of Avellino and that of Benevento, extends a territory with the typical hilly aspect with wide valleys and elevated ridges.
Precisely on these ridges at an altitude of about 450 meters above sea level, the well-prepared territory is suitable for welcoming the Greek grape variety,
the Aminea Gemina was imported from Thessaly before the Christian era.

Other expert winemakers, in love with Fiano and Aglianico,
helped us produce our wines, a
mirror of the warmth of the south and love for a
land rich in tradition and wine culture.

Taurasi and Taurasi riserva are red, still Italian wines based principally on the Aglianico grape variety produced in the Province of Avellino in the Campania region. They were awarded Denominazione di Origine Controllata (DOC) status in 1970 and Denominazione di Origine Controllata e Garantita (DOCG) status in 1993. Produced less than 40 miles (64 km) from the other Aglianico stronghold of Aglianico del Vulture in Basilicata, the volcanic soils of the Taurasi region demonstrate the potential the Aglianico grape has to make wines on par with the Nebbiolo grape of Piedmont and Sangiovese grape of Tuscany. The popularity of the region’s wine is a relatively recent phenomenon. Until the early 1990s, there was only one winery (Mastroberardino), producing wine for the export market. By the mid-2000s, there were over 293 producers in the Taurausi zone.