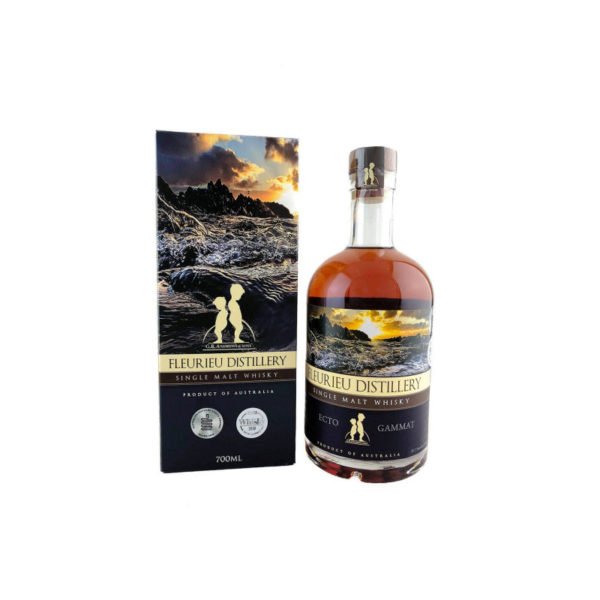 Fleurieu Distillery Ecto Gammat Single Malt. Ecto Gammat was the pivotal line issued by Leeloo in the classic Sci-Fi movie “The Fifth Element”. It means “Never without my permission”. So too with whisky barrels. They are ready when they say so and never before. This peated release is a marriage (with the barrels’ permission) of port and apera single malt.

Tasting Notes: Limited to 460 hand-numbered bottles, 52.9% alc/vol and available in 700ml bottles. The nose is heavily influenced by the port casks, hints of raisins, dried fruits and tabacco are rounded off with a medium salty peat smoke in the finish.

Fleurieu Distillery Ecto Gammat Single Malt. Ecto Gammat was the pivotal line issued by Leeloo in the classic Sci-Fi movie “The Fifth Element”. It means “Never without my permission”. So too with whisky barrels. They are ready when they say so and never before. This peated release is a marriage (with the barrels’ permission) of port and apera single malt.

Tasting Notes: Limited to 460 hand-numbered bottles, 52.9% alc/vol and available in 700ml bottles. The nose is heavily influenced by the port casks, hints of raisins, dried fruits and tabacco are rounded off with a medium salty peat smoke in the finish.

The Fleurieu Peninsula proudly weathers the wild southern ocean. In the lee of the mount lofty ranges, the fleurieu coast extends from the sandy surf beaches of coorong to the windswept rugged clifftops of the cape. Situated on the waters edge in the river port of goolwa is our distillery. It is here the whisky develops expressive maple and vanilla oak overtones mixed with spicy sea-air aromas. These elegantly combine to create a smooth bodied character that comes only from maturation on the southern coast.