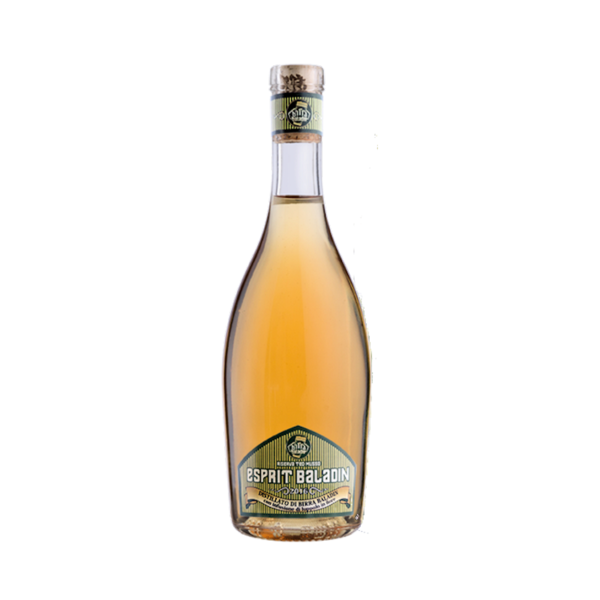 A limited edition of the Baladin beer spirit featuring the Italian hop flowers from our fields in Piedmont, added with the cold hopping technique. Bright and straw-yellow, it preserves the smoothness of the original spirit, and at the same time presents delicate, slightly bitter herbaceous notes.

Once again, Teo shows that his desire to try and dare has no limits: in December 2013, Esprit Baladin joins Esprit de Nöel. It is produced with a cold infusion of hops – a step that follows distillation. The result? A new excellent product made from beer and master Teo’s creativity.

A limited edition of the Baladin beer spirit featuring the Italian hop flowers from our fields in Piedmont, added with the cold hopping technique. Bright and straw-yellow, it preserves the smoothness of the original spirit, and at the same time presents delicate, slightly bitter herbaceous notes.

Once again, Teo shows that his desire to try and dare has no limits: in December 2013, Esprit Baladin joins Esprit de Nöel. It is produced with a cold infusion of hops – a step that follows distillation. The result? A new excellent product made from beer and master Teo’s creativity.

The Baladin brewery was originally created in 1996 as a brewpub (production and bar) in Piozzo – a small village in the Langhe area in the province of Cuneo – by its founder and master brewer Teo Musso. The first brewing system, produced by Teo himself in Belgium with the help of his friend Jean-Luis Dits from Brasserie à Vapeur (Pipaix – Belgium) and located in an almost “squatted” garage, is built using old milk vats.

Initially, Baladin only made a few beers and they were only served on tap. However, only one year after opening the brewery, Teo stared to think about designing a bottle and new recipes, which are now more than 30. The goal has always been clear: making unique beers – both in terms of taste and image – which would distinguish themselves in the world of gastronomy, both in Italy and abroad.

A few years after its creation, the cellar for the wort fermentation needs to be expanded thanks to the first commercial successes. As he cannot move the entire facility without compromising the identity of the newborn brewpub, Teo decides to convert a former chicken coop owned by his parents. In order to transport the wort, he creates a “beer duct”: a 300 m long underground duct connecting the brewery to the cellar.

Years later, the whole brewing system is moved to the former chicken coop” Its production capacity grows from the initial 500 liters to 1,000 liters. Soon after, the success reached by Baladin requires a much larger facility which can brew 2,500 liters, and a bigger structure.

The occasion to move presents itself when a former 2,600 m² aluminium fixture factory at the foot of the Piozzo hill, in the nearby village of Farigliano, becomes available. The idea is to avoid building from scratch, but rather renovate the available premises without destroying any more green areas. The structure currently hosts the warehouses of the distribution company.

In January 2012, Baladin became a farm brewery with the intention of becoming responsible for the entire production cycle of its beers, starting from the earth and the ingredients generated from the soil. The ultimate goal to be achieved through the production and sale of Baladin beers, is to support the whole cycle, producing wealth and ethical values at the same time.

The barley fields in Melfi (Basilicata) and Urbino (Marche) have now reached a total surface of over 400 hectares, covering the brewery’s need for basic malt. The raw cereals are produced in Piedmont, in the fields in Piozzo. The hops come from an experimental plantation in Piedmont, started in 2008 in cooperation with the School for Agricultural Sciences in Cussanio, and from a larger field in the vicinity of the new brewery opened in 2016. The water used at the new facility comes largely from local sources, near the brewery. Finally, the yeast, the essential soul of every beer, is exclusively selected for Baladin and reproduced internally.

The need to expand the production capacity meant that a new home had to be found.

In a large, long abandoned, almost 8-hectare area with wide green spaces, a ramshackle farmhouse of historical interest, whose depots had never been used before, has become the ideal place for the new brewery and for the project of cultural sharing that Teo has long been dreaming of.

In 2016, the brewery was opened with a technologically advanced plant, entirely built by Italian firms. The idea behind this choice is to make visitors understand the important impact that the craft sector has on companies that work in parallel sectors, such as plant construction. The entire production line can now be visited, thanks to an elevated walkway that takes visitors along a path that shows how craft beer is produced and explains the philosophy behind Baladin’s evolution. If you want to come and visit us, you can find all the information here.

The following year (2017) the project is completed with the opening of Baladin Open Garden: a place for sharing surrounded by greenery, where people can experience the connection between nature, agriculture, live beer and much more. The garden project has been developed around the reborn “Coda” farmhouse, an evocative rural building from the end of the 17th century. In summer, it is open daily. For the rest of the year, it is open on Sunday and the visit is included in the guided tours of the brewery

Baladin’s most important market is Italy, and the presence on foreign markets grows consistently.

Be the first to review “Esprit Baladin 2016” Cancel reply

Douglas of Drumlanrig 16YO. DoD Ben Nevis Cask Strength 16 Year Old Single Cask 54.1% ABV This is an extremely rare single cask 16 year old from the Ben Nevis Distillery, bottled by independent bottler Douglas of Drumlanrig. Distilled in December 1998 and bottled in March 2015, matured in American Oak ex-bourbon barrels, this single malt scotch whisky is bottled at cask strength (54.1% ABV). Unchill Filtered with no added colouring, it is limited to only 231 bottles.