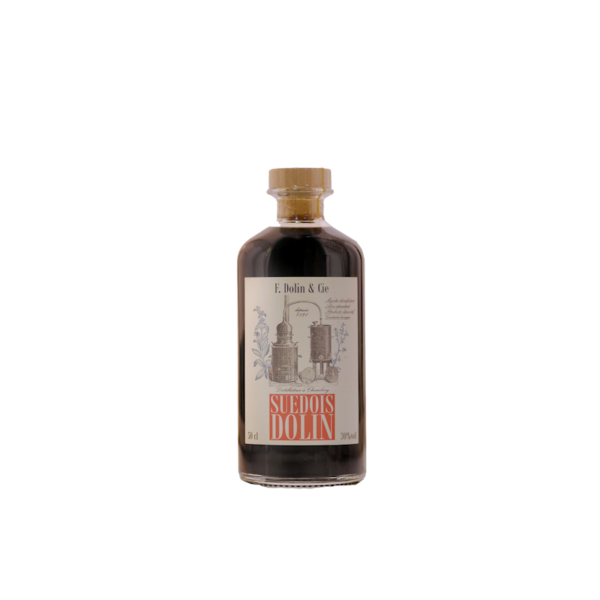 Dolin & Cie Suedois Dolin. A traditional digestif from the French Alps that started life as a medical elixir capable of “remedying over 46 diseases”. Joseph Chavasse, founder of La Maison Dolin, saved the recipe from oblivion and decided to market it under the name “Suédois Dolin” in memory of the doctor who first used it to help his patients.

Dolin & Cie Suedois Dolin. A traditional digestif from the French Alps that started life as a medical elixir capable of “remedying over 46 diseases”. Joseph Chavasse, founder of La Maison Dolin, saved the recipe from oblivion and decided to market it under the name “Suédois Dolin” in memory of the doctor who first used it to help his patients.

Dolin is among the few remaining independent producers of vermouth and the last producing Vermouth de Chambéry. Dolin continues to make the authentic product according to the principles which earned Chambéry France’s only A.O. for vermouth back in 1932. This means production in Chambéry itself, maceration of real plants rather than pre-prepared infusions, and sweetening only by grape must, wine and/or sugar. Dolin has also long produced the legendary alpine liqueur Génépy from local herbs. The particular quality of Vermouth de Chambéry was first identified in 1821 by Joseph Chavasse, whose son-in-law Ferdinand Dolin inherited the recipe and the now eponymous company. Dolin Vermouth was winning medals in Philadelphia, St Louis and London in the late 19th century, and still remains the benchmark for fine French vermouth. A hallmark of Vermouth de Chambéry was the creation of the Blanc (aka Bianco) style, a first clear vermouth, of which the Dry recipe has been celebrated in cocktails from the 1920s onwards.

According to Chavasse’s recipe, the base wine was made from local grapes. However, phylloxera led to replanting in the region with red varieties, or overly aromatic whites such as Jacquère. As with Cognac and Armagnac, the best base wine is very light, and as neutral as possible. Not surprisingly, the majority of the base wine now comes from the Armagnac vineyards of the Gers in addition to local/regional producers. On the other hand, the particular flavors and aromas of the plants are of crucial importance, and the Dolin secret recipe continues to be made from the herbs and aromatic plants naturally found in the Alpine meadows above Chambéry. These are individual vermouths of remarkable freshness, purity and complexity. Select Aperitif Bitter 1L. SELECT was created in 1920 in the heart of Venice, at Pilla Distilleries, a
place renowned for the art of liquor making. During the postwar period the
young Pilla Brothers contributed to the rebirth of this magnificent Italian
city.
As aperitif popularity began to grow, SELECT became the star of the
Venetian cocktail scene, and the main ingredient in the Original Venetian
Spritz. Today, SELECT is still recognized as the classic Venetian Aperitif
and enjoyed throughout Venice.
Taste: Complex and intense with bitter notes coming from roots and bark. The spicy and tropical notes marry perfectly with the citrusy ones. Pleasantly persistent aftertaste with fresh and rich notes coming from the citrus fruits and essential oils.
In Venice, a green olive is used as the garnish to create the perfect blend and balance of flavor.