The Deadman’s Point story
We chose the name of this local landmark for our spirits because our distillery looks out on Deadman’s Point and we wanted to celebrate the history of our local area. Why was this beautiful promontory given such a sinister name?

Well, this is the story….
Back on the 5th May 1900 four men of the Kettering Auxiliary Corp, with Sergeant Edwards in charge, walked down to the Trial Bay Rifle Range. When they got there they discovered that they didn’t have a competent marker with them – the person who marks the targets and indicates the value and position of each shot for the shooters.
The sergeant, not wanting to waste anyones time, drilled the men and then dismissed them. One of the men decided they would have a shot at a stake on the beach and Private Lord asked if he could do the same. Sergeant Edwards agreed that he could.
Private Lord, lined up his Martini Henry Rifle with the stake. It was about two hundred yards away, not an impossible shot.
••••

Allan Coombs, meanwhile, had been out doing some shooting of his own in Little Peppermint Bay and was on his way home to Kettering. He had decided to walk around the point to Trial Bay. As he reached the end of the point he heard a bugle call. He looked around but couldn’t see any sign of anyone using the rifle range. He stepped towards the beach, walked about five metres, and was suddenly lying on his back with an excruciating pain in his left side.
He called out, struggled to his feet and staggered the last few metres down to the beach.
••••

The men of the Kettering Auxiliary Corp heard the shout. They looked at each other in shocked disbelief and three of them started to run along the beach to where they had heard the cry.
Allan Coombs, blood soaked and in obvious agony, stumbled onto the beach into their arms.
Allan was taken to his home in Kettering and the doctor was called. The bullet had pierced his left side, about seven inches below his nipple. On its way through his body it had clipped his lung , shattered some of his bones and finally, before exiting, damaged the muscles of his back.
But Allan didn’t die, at least not from being shot. In fact, he took the Tasmanian Government to court, suing them for £1500 damages. Unfortunately for Allan he lost the case.

So why Deadman’s Point?
The Tasmanian Nomenclature Board says that Mr Jack Rex, who owned land on Trial Bay, told them that Deadmans Point was known as that for as long as he could remember and that the name possibly came from the fact that Trial Bay was used as a rifle range with targets on the southern point and that a man was accidentally shot there.
That’s the story we discovered. For all we know it may not be the real reason Deadman’s Point got its name.
If you know the real story, and have some hard, convincing evidence, we would love to hear it, and you never know, it might even be worth a bottle of Deadman’s Point Gin! 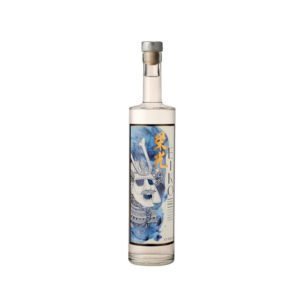 Eiko Vodka. A 100% corn based vodka from Hokkaido island, the northernmost of the four main islands that make up Japan. Three times distilled and four times filtered, the name translates to “Samurai Glory”.
Double Gold at the San Francisco World Spirits Competition 2019